memories of a dog man 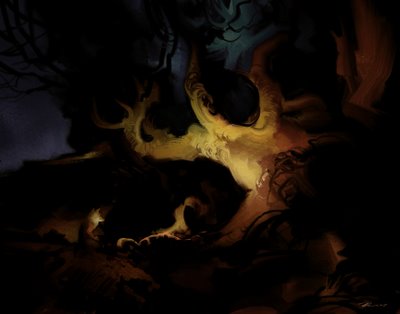 i think i have used up all my compliments by now!

... this is just beautiful~ and you make it seems so easy.

mysterious, beautiful... I love it

Romulas underneath a fig tree?

Astounding. How can you just get better and better. Out of superlatives.

A little dark for 'Renard the Fox'...Perhaps this is the long awaited Gothic version of the old tale.
Cheers.

Thanks for your remarks folks.
This is an oldie. I just found it again. I must have done while trying out an early edition of PAINTER. Which is a clumsy brute of a thing but it does eventually yield to the touch.
Y' know Luc, that's not a bad idea. I read the Renard tales some years ago and found them very 'gothic'.

Well, I'm sure you are aware of the suprising animated version by Ladislas Starewitch from the 30's but apart from this,I don't know of any decent screen or illustrated version. The dark overtones of the story are consistant with medieval folk tales (the casual cruelty of the main character for instance) and the trickster figure of course is even more ancient. Did you know that up till that period, the french word for fox was 'goupil' but the stories became so popular that the word changed to 'renard' (the name of the fox in the book).

Luc,
Yes!
I have the STAREVITCH film.
The 'goupil'/reynard story is very fascinating. Reynard is (in German) Rheinhardt = Hard-head (in English)
(German visitors please correct me if I'm wrong.)
Marianne's friends in the south have some of Max Cabane's drawings of Le Roman de Renard. I don't know if they were ever published. Very funny, very peasant.

I love the art of Cabanes, particularly his later semi-autobiographical recollections of the France of the fifties(Colin Maillard) but I was not aware of his adaptation of 'Le Roman de Renard' (apparently published in 1985 by Futuropolis) in collaboration with Jean Claude Forest.
Thanks for the tip.
Also an interesting new french comic book adaptation is to be found here:
http://thierry-martin.blogspot.com/
Cheers.

simple amazing!!! i love all your works

Thanks for your comments, everyone.
Those who don't live in London should know that the fox is a frequent night time visitor to back streets, yards and gardens here.
Long live the creatures of the night...

Superbe, I saw it and thought about Goya.

At least the chance of having the full hunt in hot pursuit jumping over your back fence is now pretty remote.
If you have the fox in London, here in Los Angeles, we have the coyote. It is notable that they have much in common as 'trickster' figures both in medieval europe and in native americans folk tales.
Cheers.

limbolo said...
This comment has been removed by the author.
7:55 pm GMT

Well, the chances of a hunt jumping through our windblown backyard were always remote.