The Old Way and the Wicked. 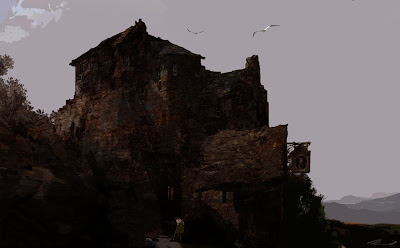 We are back to normal operation mode in limbolo land (: The air was apparently getting thin on the last one ... no wonder. I also quite often see how slippery the ground becomes as soon as I start the faith argument...even among the closest of my friends.

As for Treasure Island I agree with you completely, they totally missed the point.

Hmmm... Well, I'm still hoping to cook up a bit of controversy.

Yep, Disney didn't get it that time, and it will not be the last...

I think Disney changes some times good,like Pinocchio.Some times bad.
But picture on the top WICKED!
What is it for?(if not a secret):o)

In a script for a project I've worked on some years ago, the writers circumnavigated the problem of no having female characters in the original by adding a very strong minded niece of Squire Trelawney, who goes on board as a stowaway. It worked beautifully and there was great chemistry between her and Jim Hawkins.

No secrets here. This picture has no connection with the Treasure Island project we developed at Uli Meyer Studios a few years ago. Except that that set me thinking and wondering why the jist of the story seemed to have nothing much in common with other work by R L Stevenson. Did he just write a sea-faring yarn for boys? Well, it's certainly not one of his great works. It's not Jekyll and Hyde, not The Master of Ballantrae and there's no writing in it - with the possible exception of the chapter on the death of Israel Hands - that compares to Weir of Hermiston. But the dark muse haunts Treasure Island too.

Oscar, maestro,
As you know, I've seen your bravura adaption - in plan, anyway.
I'm just thinking about how you could put in an interesting female part without adding one. When I suggest Long John as a woman the local machos all groan in disbelief, but I believe my theory is sound and consistent with RLS' main themes. And he too, vanished into the islands.

I find your choice not only inspired but also essential for future adaptations of this piece. The relationship between Long John and Jim is one of "manqué" paternity. How much more Oedipical and attractive would be a Mother-Son affair among the pirates. Besides, the Robert Newton characterisation as a roguish pirate is becoming far too stereotypical.

Well, yes.
Ageing male character actors have had their fun with this character for long enough. Now it's time for the girls to take a shot at it.

Fortunately, Disney's disaster has probably put a curse on Treasure Island for time to come. Time, at least, for them to stop fucking around with it.

The whole tale reeks of Freudian undercurrents. The dismal dad who dies early so Jim can love his mum without competition. The one-legged / therefore 'castrated' / therefore 'female' mentor. The competitor for Long John's love: Israel Hands, his closest - perhaps only - friend and therefore lover. Israel Hands - that name! - is the most moving character. An existential dreamer who has no interest in the treasure but lives only to navigate, to journey by the stars. Jim kills him but can never overeach him.

I dream of being a moral failure.

Yeah!...I also found Israel Hands a tremendous character!Great to explore, and so was Blind Pew...The author of the script I worked on was an old communist and thought that the pirates were more entitled to the treasure than Trelawney and wanted to describe the pirates as "The Working Classes"! Quite an interesting idea!
Treasure Planet was AWFUL but I must confess great fondness for Byron Haskins' live action movie even if Bobby Driscoll's Jim was totally miscast. I saw this film for first time when I was about six or seven.

Stevenson's historical romances are nearly all set in the aftermath of the '45 rebellion. I believe the pirates in Treasure Island are his imagining of the race of primitive Scottish tribesmen who were wiped out in the Duke of Cumberland's notorious campaign that closed the rebellion and started the Highland 'clearances'.
When Dr. Livesy is introduced in the tale we are told that he was formerly an officer in Cumberland's regiment. A hardened soldier, a participant in one of history's minor genocides. Tough Bill Bones is afraid of him. Not the cosy family GP we're shown in all the movie adaptions.

i love reading your blog not just because of the art. it's good to hear that somebody is also thinking about things happening. too many artists are stuck in cartoon-land. go go go!

Thanks. Love yours too.

Seems Ken Russell made Treasure Island for TV about 15 years ago with Hetty Baynes as Silver.... But it was a musical comedy. Repudity, debunkerdom.

No controversy... though you would had some.
The piece is wonderfull. It happen that I want to be inside many of your paintings.

BEAUTIFUL , the way you capture the emotional temperament about a place , somehow it has a sweet void one wants to be a part of!
Glad to have found your work friend!

this piece is fantastic.

Like the others I can't resist the urge to engage with your work. Very nice.

Gentlemen,
Thanks and greetings.

Fantastic moody pic of the Admiral Benbow. I always thought that the begining of the tale was the best part. I'm not much of a deep thinker when it comes to characterisation, but I'd guess a couple of heads like Wayne and Garth were kickin back having a toke and one says 'Instead of Treasre Island let's call it Treasure Planet! ...and it'll be set in the future!'

Great work, your blog is excellent. Sorry for interrupting an interesting debate.

No need to apologise El Galvinator. You're more than welcome.

ALways AMAZING to go thru ur blog!..
The way you interplay those various flat color tones is just amazing ... It just adds a nice level of detail & texture that makes me ponder the artwork for a long while !
cheers & keep em coming ..

Disney would floor everyone if they stopped the formula and did a classic story just the way you discribed. Nice paintg too lots of mood, wonderfull texture.