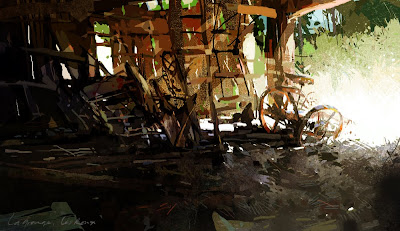 Great!....Are you going to see the exhibition of the Wyeth at the Dullwich Picture Gallery?

I'de love to stay here!One of My favorite of yours so far!:o)

OK, I get the hint. There could be a hefty blonde kipping stoically in the gloom over on the left in here.

I've been to see the Wyeths. A really interesting little show. We don't get many opportunities to see these pictures 'in the flesh' as Jonez would have it.

I once remember hearing a very snooty American critic saying that you could 'learn to paint like Andrew Wyeth'. Well, you could learn - and if you did you'd learn a lot but there's something else there.. Something manly, "brackish...In the American grain." To quote (clumsily) another American poet.

Thanks.... This could be a Russian scene too.

Great mood, could be the south of France, or Italy maybe... or just a very peaceful place to retire :)

Stupendous as always-although this one makes me feel lonely.

No bullfighting in Catalonia from now on Limbolo.

I've been to the studio 3 times to discuss work with Uli, each time your chair was empty. This gave me an opportunity to look at your desk (without touching anything).

It's the most incredible visual journey with so much incredible work-it's up there with Brancusi's studio.

You should take a picture of it for the blog, and all your adoring Limbolites.

Today I went to see the Wyath's exhibition and found it quite dismal. I almost asked for my money back.

What dismayed you most?

Oscar must be too dismayed to talk..

I'm sorry to have made you feel lonely Crookie.

Yes, it looks like the corrida is finally over in Catalonia. I hear they haven't banned the night time bull games like Toro Embolado which would be considered just as cruel as the bullfight in the UK. In fact something just like it - Bull on a chain - was banned in Britain in 1820 (or thereabouts)

Andrei, I just bought a dinghy like your mate Gregor. I plan to go paddling about the Lac de Castillion with Mme. Limbolo, although I haven't submitted this plan to her yet.

The Wyath's.
I liked some of grandaddy's illustrations (RiP Van Winkle, for instance). Not crazy about Andrew's watercolours and profoundly disgusted by the rest. Specially thr paining of those firemen raising the American flag in Iwo Jima style celebrating the heroism of 9/11. Ahhhhhhhh!!!

Funny... I don't recall the 9/11 picture at all! If there's a 'genre' in painting that I dislike it has to be 'History Painting'. It gives me the creeps whether it comes from Wyeth, Velasquez, Picasso or whoever. There's another rotten one - by old NC - showing marines coming ashore under fire. All painters seem to save up their worst tricks for History Paintings. Painters as civil servants - ugh.
For me, much of the pleasure in this exhibition is in getting up close to this stuff and seeing what these craftsmen were up to. Having said that I do think that Andrew Wyeth was a true poet, singing a dried-out, lonesome song that touches me. I don't think his best is on show here.